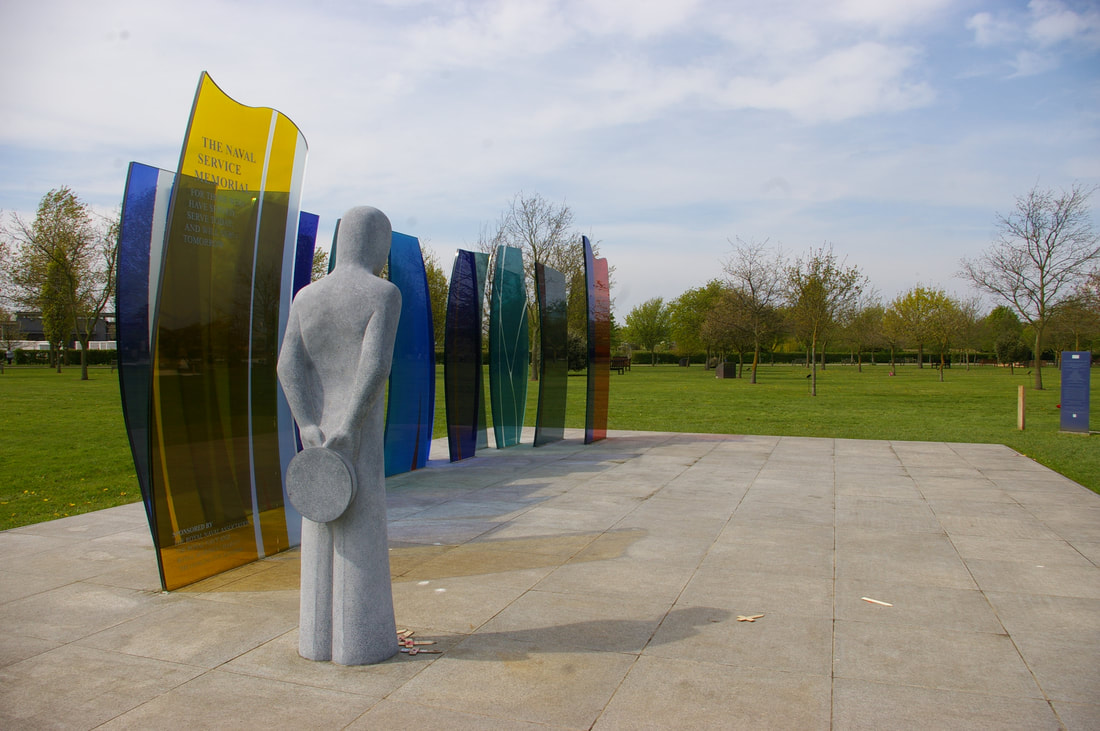 The RN. memorial
The Naval Memorial shows a rating standing 'At Ease'and looking at the outline in shadow of a ship. This is made by the vertical glass panels standing for the oceans and seas that the RN has fought and sailed over. The shadow shows at 11.00 each morning.
1
Important Information
Mike Crowe has resigned and your committee is  meeting on 3rd & 4th of October at the Union Jack Club.It is hoped to
produce an up to date constitution  and plan a future 'way ahead' for our association. To this end our Secretary, Peter Lacey, has tried to contact most members for their ideas on these subjects. Although the response was not very good we will try to produce something for ALL our members. The results will be promulgated by letter to you and in Shipmate.
Please, if you have any ideas, thoughts or proposals let us know via email or snail-mail. 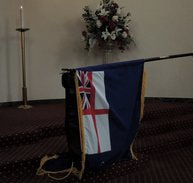 We have only one notification.
Dennis G Daniels - July 2017 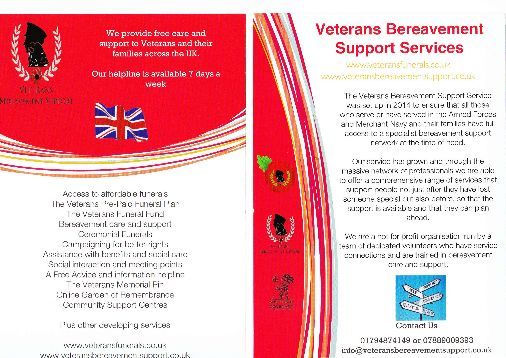 The above is to show that there is support services for bereaved veterans. Sorry about the quality but you can find it on the web.
​2
​ 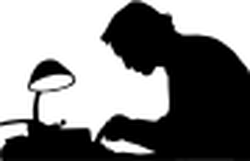 Editors Mumblings
This edition is going to be shorter than the last lot (who said 'Thank Goodness?) as to the news and the forthcoming committee meeting.
I have received at least two 'articles' to enter in this edition and I'm looking forward to it.
One is from Barry Lovatt who's memory was jogged by the picture of the B40 receiver on the cover of the last edition. The next is from Joy Guggiari and tells of her joining up and what life was like for her in and after WW2.
I'm including some website addresses which direct you to funnies and the usual cartoons etc. There will be a further one after the UJC meeting with whatever results are forthcoming.
​Thanks.
​ 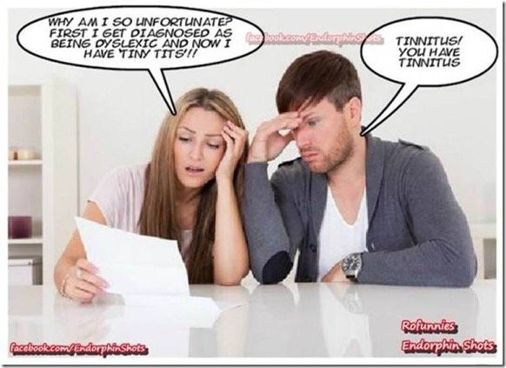 Seeing your article about B40's brought back a few memories. I joined St. Vincent May 1958 before going on to Collingwood to train as an REM. In the same family as the B40 was the B41 (covering lower frequencies) and the B62 which was a modified B40 for ship sound reproduction equipment systems.

In 1961 I was on the Rocket (type 15 frigate) the ship had a long passage (for some reason called the Burma Road) which ran inside for much of the ships length. Part way along this passage behind a wire mesh door was a small room housing the ships SRE which at the time was unloved and  unused. I decided to get it working and in use. Firstly I found that the B62 had no power to it. Running through the room were numerous cables which made life difficult to trace individual cables. However,with due diligence, I traced the cable back to a fusebox in the passageway. Not all the fuses were marked on the outer plate, when I opened the fusebox I found that a pair of fuses were missing, no problem I soon found a couple of spare fuses and put them in the empty spaces. When I returned to the SRE room there was still no power to the radio so I went back and removed the fuses. After some more delving in dark spaces  I found a switch box I switched this on, still no power. I visited the fusebox again, put in a pair of fuses, returned to the SRE room, still no power, returned to the fusebox, extracted the fuses, return to SRE room for another go. This routine was repeated several more times without success. I did notice that each time that I replaced and removed the fuses that one of our electricians a lad named Hornsey also visited the same fusebox shortly after I had removed the fuses. After 6 or so goes at the replacing/removing fuses routine I found the cause of the problem which had nothing to do with missing fuses.

Shortly afterwards we were having a cup of tea in the mess when a somewhat jaded EM Hornsey came in, apparently he had been repairing a motor in the boiler room and despite removing the fuses he kept on getting shocks off the motor. He had checked several times that he had removed the correct fuses. He was starting to get a bit twitchy about working on this motor because of the shocks. Whilst he and the other EM's theorised about what could cause the problem I remained silent!

Later in Gib. I was playing about with the radio on long wave when it announced that " Down Your Way" is today, coming from Wellington, Shropshire where I was born and bred. I listened agog but was disappointed that they did not interview a single person that I knew. In training we were told that the B40 was a high grade, highly sensitive receiver. When sailing between Singapore and Hong Kong there used to be a dead zone where we could not pick up the commercial radio stations from either Singapore or Hong Kong. Cheap transistor radio's bought in Aden did not suffer from any such dead zone.

Whilst in Hong Kong I caught a throat infection which never got treated properly and eventually led to my discharge from the RN at the age of 20. After leaving the Navy I went to work for the Army (REME) repairing electronic equipment. Over time I rose through the ranks and became the manager of the Electronic shop with about 100 staff. One day we were approached by the local branch of the Sea Cadets asking if we could repair their"special radio". It turned out to be a B40 for which we had no technical information. The mechanic who was trying to repair was a struggling a bit so I gave him a hand to fix it. It is surprising what you can remember sometimes even after a gap of 20 years or so. It was nice to see your article about the B40 and bring back fond memories! 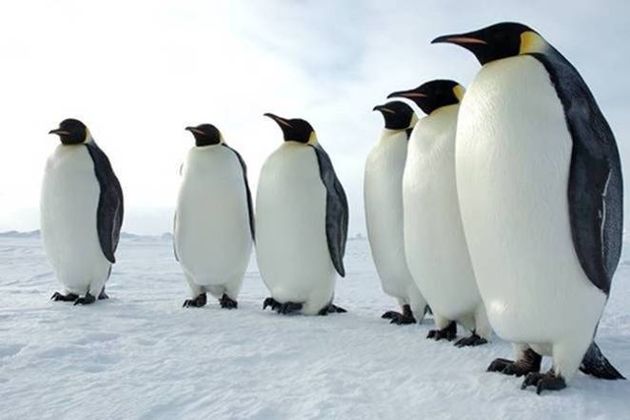 
Did you ever wonder why there are no dead penguins on the ice in Antarctica?  Where do they go?

Wonder no more!!!  It is a known fact that the penguin is a very ritualistic bird which lives an extremely ordered and complex life.
The penguin is very committed to its family and will mate for life, as well as maintain a form of compassionate contact with its offspring throughout its life.

If a penguin is found dead on the ice surface, other members of the family and social circle have been known to dig holes in the ice, using their vestigial wings and beaks, until the hole is deep enough for the dead bird to be rolled into, and buried.

The male penguins then gather in a circle around the fresh grave and sing:

You really didn't believe that I know anything about penguins, did you?

I am sorry; an urge came over me that made me do it!!!

Oh quit whining … I fell for it, too.

Goodbye to my England, So long my old friend
Your days are numbered, being brought to an end
To be Scottish, Irish or Welsh that's fine
But don't say you're English, that's way out of line.

The French and the Germans may call themselves such
So may Norwegians, the Swedes and the Dutch
You can say you are Russian or maybe a Dane
But don't say you're English ever again.

At Broadcasting House the word is taboo
In Brussels it's scrapped, in Parliament too
Even schools are affected. Staff do as they're told
They must not teach children about England of old.

Writers like Shakespeare, Milton and Shaw
The pupils don't learn about them anymore
How about Agincourt, Hastings , Arnhem or Mons ?
When England lost hosts of her very brave sons.

We are not Europeans, how can we be?
Europe is miles away, over the sea
We're the English from England, let's all be proud
Stand up and be counted - Shout it out loud!


Let's tell our Government and Brussels too
We're proud of our heritage and the Red, White and Blue
Fly the flag of Saint George or the Union Jack
Let the world know -

WE WANT OUR ENGLAND BACK !!!!
Letter received from Shipmate Joy Guggiari
This was kindly sent to my plea for articles for 'The Shipmate'

Joy, (she was called Whiter then) joined in Portsmouth in December '42 to do her two weeks training.and was then drafted to Alverstoke. From here the girls where sent to various establishments to cover whilst the girls were on leave etc.
​Joy was sent to Collingwood and as she was both a fast and accurate worker they decided to 'keep' her.She inquired of the Chief (Burroughs?) to ensure she wasn't taking the original girls job only to be told " You'll do as you're told". Joy liked the work and enjoyed it but had a further run in with CPO Burroughs. Whilst out in Fareham with her friend Mary they were stopped by the patrol headed by Burroughs who ordered them to replace their jackets. As the temperature was above 80 degrees and the removal of jackets was allowed, she refused.and he never spoke to her again ! Shortly after this the girls moved into an office like a typing pool.
She married in 1944 to a man she'd been dating for a year as he was going abroad but wished she hadn't. She kept to a single life until her friend, Mary, asked her to make up a foursome. During this she fell in love 'for the only time in my life'.
Due to misunderstandings they broke up and although he tried to get back in touch much later after her husband died she didn't realize it was him until it was too late. His name was George Parkin and he came from Leeds.
Her husband made her tear up any photo she had of George but not of others.
Joy has let me know that although she is now 93 and crippled due to damage done in hospital, her memory appears in good order.
​I would like to thank her for her letter and wish her the best for the future.